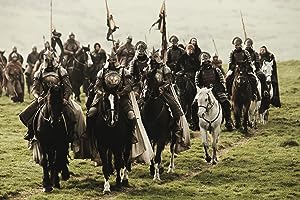 The Kingsroad is the second episode of HBO’s series Game of Thrones, first aired on April 24, 2011. It was written by the show creators David Benioff and D. B. Weiss, and directed by Tim Van Patten.

Nearly all the action of the episode happens while the protagonists are traveling: Eddard Stark and his daughters accompany the king’s entourage to King’s Landing to occupy the post of Hand, Tyrion joins Jon in his travel to the Wall, and the newly wed Daenerys goes with his husband’s khalasar to the Dothraki city of Vaes Dothrak. Meanwhile, in Winterfell, a grieving Catelyn Stark watches over his unconscious son Bran.

On their way to Vaes Dothrak with all the khalasar, Jorah Mormont (Iain Glen) reveals to Viserys (Harry Lloyd) that he was exiled for selling poachers to slavers. Viserys assures him that he would not have been punished had he been the king.

Danaerys (Emilia Clarke) asks one of her handmaidens to teach her how to please Drogo (Jason Momoa). She is able to make the Khal treat her as a wive and not a slave, making him look at her face while they are making love.

Some weeks have passed since Bran (Isaac Hempstead-Wright) fell from the tower, and while he is still unconscious, it seems that the boy will survive. The Lannister twins are not please with the news.

It’s time for farewells, with the Stark family having to split apart with the two daughters going with his father to the capital and the bastard Jon Snow (Kit Harington) joining his uncle Benjen at the Wall. Before leaving, Jon gives a sword to his sister Arya (Maisie Williams) as a present. Catelyn (Michelle Fairley) is devastated and has stood vigil besides her son Bran since he fell. He asks Jon to leave when he comes to say goodbye to Bran and chastises her husband Eddard (Sean Bean) for leaving her and not refusing Robert’s demands. Before leaving for the Wall Jon asks Eddard about her mother, and he promises to talk about her the next time they meet.

A fire breaks out at Winterfell, and while everyone is distracted by it a hired assassin tries to kill Bran. Catelyn is not able to stop him, but Bran’s direwolf jumps in and tears the killer’s throat out. The murder attempt makes Catelyn suspect his son didn’t fall accidentally, and after finding a blonde hair on the abandoned tower, concludes that the Lannisters tried to kill Bran twice. After confiding with Robb (Richard Madden) and the most trusted advisors, she decides to go to King’s Landing to warn Lord Eddard.

In his bedroom, Bran finally awakes and opens his eyes. Game of Thrones season 1 episode 2 watch online only on our website.

At the Inn at the Crossroads

On their way to King’s Landing, the king’s entourage has stopped to rest at an Inn. While the recently promised Prince Joffrey (Jack Gleeson) and Sansa Stark (Sophie Turner) are walking along the river, they ron into Arya sparring with sticks with a kid. Joffrey wants to punish the boy for attacking a nember of the nobility, using his real sword against him, but Arya hits Joffrey and her direwolf Nymeria bites his wrist.

Afterwards, Joffrey lies to king Robert and tells that the boy, Arya and the wolf attacked first. Unwilling to leave his bethroted as a liar in front of the crowd, Sansa claims she doesn’t remember anything. King Robert refuses to punish Arya, but gives in to Queen Cersei’s (Lena Headey) demands and orders the direwolf killed. Since Nymeria has fleed, Sansa’s wolf Lady is to be sacrificed. Unable to convince the king otherwise, Eddard decides to kill the animal himself.

Arya was brilliant, in my opinion. To be honest, I like most of all the actors. Of course, in plus this, too, Robert, Ned and, of course, Tyrion.

Someone mentioned about how to say Cersei – I also find it annoying. Every time there is a scene with her, I really like the actress herself and is perfect. But I feel no beating from her fire – all the while talking softly and whispers, appear to preserve a stoic calm. And Cersei was unrestrained galerijai!

Also, disappointed me, Sansa, who seems terribly boring. Fell to minus Joffrey, which pushes me appearance.

Danaerys is really slowly gaining momentum, but all the time does not convince me the game actress. I hope that will show what you are capable of, because so far treat it with a large margin.

Anyway, I liked the second episode more than the game of thrones season 1 episode 1 watch online free with english subtitles. I forgive using the chain with Cersei’s child, maybe it will help later understanding to viewers who have not read the book. There are several threads out of the book, which did not prevent me – with the possible exception of Jamie’s conversation with John, for me, completely unnecessary.

I forgot about the most ridiculous scene in Game of Thrones season 1 episode 2 watch online free! What did they come up with to show Catelyn, who is conducting a private, personal investigation – looking for traces of bran’s fall and is Cersei’s hair in the tower?! This scene, at least for me, is completely deleted. Too pretentious and directly shifts the blame for all evil to the Lannisters. At all me seems, that the authors receives more superficial treatment with mountains, they found, that, of course, the form of they bad, and other good, that has little in common with reading.