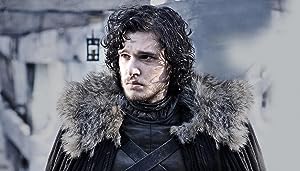 Lord Snow is the third episode of HBO’s series Game of Thrones, first aired on May 1, 2011. It was written by the show creators David Benioff and D. B. Weiss, and directed by Brian Kirk.

The plot thickens as Eddard arrives in King’s Landing, followed shortly by Catelyn, looking for Bran’s would-be murderer. Arya reveals her desire to learn sword-fighting to her father. Joffrey is given a lesson in ruling the Kingdom by Cersei and Robert longs for the glory of his past. Meanwhile, Dany learns she is with child…

Daenerys (Emilia Clarke is learning to think and act like the ruler she now technically is. She begins to gain the respect and trust of Ser Jorah Mormont (Iain Glen) who tells her about his family, and how he betrayed the trust of his father, Lord Jeor (James Cosmo).

Viserys (Harry Lloyd), who is still behaving as if he is king of all he sees, angrily assaults Dany when it appears she has given him a command. As punishment, he is choked and nearly killed by Dany’s bloodrider Rakharo (Elyas Gabel) and force to walk back to camp; the first hint that the Dothraki do not see him as a king.

Irri (Amrita Acharia) notices that Dany is pregnant, and shares the news with Jorah and Rakharo. Rather than be pleased, Jorah mysteriously departs for Qohor without explaining himself. In their tent, Dany reveals to Drogo (Jason Momoa) that their child is a boy.

With Bran (Isaac Hempstead-Wright) now awake, Old Nan (Margaret John) tells him a tale of a long-ago endless winter, where the White Walkers first appeared riding their dead horses and raising Wights from the men they slaughtered. Her story is interrupted by Robb (Richard Madden) who sadly confirms to Bran that his injuries are permanent, and he’ll never walk again. Bran, unable to remember a thing about his fall, wishes he were dead.

Eddard’s party arrives at King’s Landing, where Eddard (Sean Bean) is immediately summoned to a meeting of the king’s “Small Council”. On his way through the throne room, he encounters Jaime Lannister (Nikolaj Coster-Waldau), and it is revealed to viewers for the first time that Jaime was the man who killed Robert’s predecessor, the mad king (and Dany’s father) Aerys Targaryen. Jaime reminds Eddard that Aerys killed Eddard’s father and brother, while the whole of his hall looked on. Eddard does not consider this grounds for Jaime to break his oath as a knight of the Kingsguard, telling Jaime “You served your king well, when serving was safe.”

Later he arrives at the meeting of the Council, consisting of the king’s brother, Lord Renly (Gethin Anthony), the Master of Laws, Lord Varys (Conleth Hill), a eunoch who serves as the king’s Spymaster, Grand Maester Pycelle (Julian Glover) King’s Landing’s chief learned man and Lord Petyr “Littlefinger” Baelish (Aidan Gillen), the Master of Coin. Littlefinger once duelled Eddard’s brother for Catelyn’s hand, and almost states openly that he is still in love with her. After Renly announces that Robert plans to hold a great Tourney in honor of Eddard, the newly-appointed Hand learns that the crown is heavily in debt, owing more than half to the Lannisters. Eddard refuses to entertain the notion of a Tourney until he has had a chance to speak to Robert.

Meanwhile, Catelyn has arrived in King’s Landing in secret, but nonetheless is taken by a pair of city watchmen to a brothel owned by Littlefinger, who tells her he brought her there to keep her safe and anonymous. Varys is also there, having been the one to learn of Catelyn’s arrival. The three of them and Ser Rodrick (Ron Donachie) discuss the attempted murder of Bran, and Littlefinger unveils a shock to all of them; the dagger used by the assassin was once Littlefinger’s own, but he lost it in a bet with Tyrion Lannister, betting on Jaime Lannister to win a previous Tourney.

Pycelle gives Eddard a message that -Bran has woken, and Littlefinger alerts Eddard that his wife has arrived and is in his brothel. Eddard reluctantly takes on Littlefinger as an ally who will help them find Bran’s murderer.

Back at the keep, however, Ned discovers his hands are more full than he imagined. His daughters are at each other’s throats. Arya (Maisie Williams) is furious at Sansa (Sophie Turner) for lying to protect Joffrey. Ned reminds her that Joffrey is prince, and will be king one day with Sansa as his wife. Arya cannot believe her father would allow Sansa to marry such a horrible person. Learning that his younger daughter aspires to be a swordsman, and has a sword of her own thanks to Jon, he hires a Braavosi “water dancer”, Syrio Forel (Miltos Yerolemou) to teach her the art of swordsmanship.

King Robert (Mark Addy), drunk and in a foul mood, talks with the head of his Kingsguard, Ser Barristan (Ian McElhinney), of their days as warriors, discussing their first kills. The king insists on Jaime joining the conversation, calling him “Kingslayer” and asking what the Mad King said when Jaime stabbed him in the back. Jaime replies weightily that he simply continued saying “Burn them all.”

Jon has joined the other recruits under the firm and brutal hand of Ser Alliser Thorne (Owen Teale), and easily beats every opponent sent against him. Ser Alliser berates them all for their poor performance, but has no kind words for Jon, dubbing him “Lord Snow” to mock his bastard heritage and telling him “You’re the least useless person here.”

Benjen (Joseph Mawle) is leaving for a several-month-long ranging north of the Wall, and Jon naturally expects he will be taken along, only to be shot down roughly when Benjen tells him “On the Wall, a man gets only what he earns.” Tyrion later informs Jon that he isn’t “better” than any of his new “brothers”, but only more fortunate, as he was trained by a Master-at-Arms, while the others are all orphan boys or criminals, who have likely never held a sword before today. Jon later gets word from Winterfell about Bran’s recovery.

I watched episode so a few remarks…

+ Petyr, Varys, Pycelle OK
+ almost all the scenes on the Wall (except John saying goodbye to Tyrion)
+ I liked the way Ned grabbed Littlefinger by the throat
+ ‘The War of Cersei’s Cunt’, simple, rough but funny, in the book too it probably was
+ ser Barristan (because I believe it was him) would look cool to me
+ a cool scene of Jorah Mormont talking to a young dothrak, though it may surprise that the latter collects shit from a woman. Well, Mormont already have something in mind right after found out about the pregnancy of Daenerys (not know, plus or minus)
+ Syrio OK I know I kind of had to be bald but I’ve never been a big fan of him so I’m this year 😉

+/- Yoren, as in the book was rather mrukiem and such a little menelowatym type 😉 in the series looks a little better, I like how funny. Despite the digressions from the book, this is probably a change in the plus, though, as anyone prefers…
+/- Maester Aemon, seems to look fine, but somehow I had a different view

– Renly, absolutely not imagined, but everyone will not play, as you know…
– weak good-bye to John with Tyrion, so cold, in the book I liked
– Extensions, learning the language of the Dothraki looks like how to say it… ridiculous?

The end of the scene so itself. Less drama than previous episodes. I wonder what Ned remembered. Lyanna’s Wolfsbane?