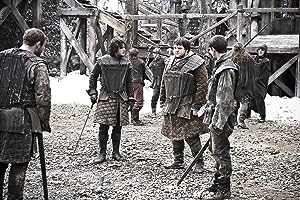 “Cripples, Bastards, and Broken Things” is the fourth episode of the HBO medieval fantasy television series Game of Thrones, first aired on May 8, 2011. It was written by Bryan Cogman and directed by Brian Kirk.

The plot revolves around Eddard Stark’s investigation regarding the sudden death of his predecessor as Hand of the King. Meanwhile, Jon Snow defends a new recruit at the Wall and Viserys feels increasingly frustrated after the Dothraki horde arrives at Vaes Dothrak.

The title comes from a quote from the original books maintained in the episode’s script, pronounced by Tyrion Lannister after he unexpectedly helps Bran Stark by providing a design for a saddle that may allow him to ride: “I have a tender spot in my heart for cripples and bastards and broken things”.

Lord Eddard Stark (Sean Bean) begins his covert inquiry into the death of the previous Hand. Questioning Grand Maester Pycelle (Julian Glover), who tended him in his final days, he learns that Jon Arryn’s last words were “the seed is strong”, and that he was reading a book titled “The Lineages and Histories of the Great Houses of the Seven Kingdoms”.

Helped by Littlefinger (Aidan Gillen) and his net of informers, he follows up two more clues regarding the last days of his predecessor. He questions a smith’s apprentice that Jon Arryn used to visit in his last days, and due to his resemblance to Robert Baratheon he deduces that he is the king’s bastard. He also tries to obtain information from Jon’s former squire, now knighted, but he is killed while jousting at the tourney held in Eddard’s honor. The knight responsible for this apparent mishap is Ser Gregor Clegane (Conan Stevens), also known as “the Mountain” due to his towering size, a Lannister bannerman and the Hound’s brother.

The Dothraki horde arrives at the city of Vaes Dothrak. Viserys (Harry Lloyd) is upset that Khal Drogo (Jason Momoa) has still not given him command of an army to conquer the Seven Kingdoms as was agreed upon when Daenerys married Drogo. When he misinterprets the summons of his sister Daenerys (Emilia Clarke) as an order, he gets mad and hits his sister. For the first time, though, Daenerys fights back and threatens her astounded brother with cutting his hands off if he ever harms her again. Later on, in a conversation with the exiled knight Jorah Mormont (Iain Glen), she realizes that Viserys would not make a good king and will not take them home to Westeros.

The Night’s Watch receives Samwell Tarly (John Bradley), a new recruit who rapidly becomes the center of bullying of the master-at-arms Ser Alliser Thorne (Owen Teale). Sam is fat, cowardly and clumsy, and was forced by his father to take the Black and forsake his inheritance because he considered him unworthy. Jon Snow (Kit Harington) defends Sam and convinces the rest of the recruits not to harm him, much to Alliser’s rage. The Night’s Watch veteran warns that when winter comes, they will have no chance of survival.

Tyrion (Peter Dinklage) stops by at Winterfell as he returns to King’s Landing after his visit to the Wall. But he is not welcomed by the acting Lord Robb Stark (Richard Madden), who suspects the Lannisters are behind his younger brother’s fall and subsequent murder attempt.

Further south, Tyrion and his small retinue stop to spend the night at the Inn at the Crossroads. There he recognizes lady Catelyn Stark (Michelle Fairley) in disguise. With her cover blown, she requests the help of her father’s bannermen present at the inn to seize Tyrion, and to face a trial.