HomeSeason 1Season 1 Episode 5 - The Wolf and the Lion 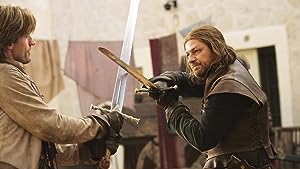 The Wolf and the Lion (2011)
55 min|Action, Adventure, Drama, Fantasy|15 May 2011
9.1Rating: 9.1 / 10 from 28672 users
Catelyn has captured Tyrion and plans to bring him to her sister, Lysa Arryn, at the Vale, to be tried for his, supposed, crimes against Bran. Robert plans to have Daenerys killed, but Eddard refuses to be a part of it and quits.
Director: Brian Kirk
Creator: David Benioff (created by), D.B. Weiss (created by), George R.R. Martin (based on "A Song of Ice and Fire" by), David Benioff, D.B. Weiss
Actors: Sean Bean, Mark Addy, Nikolaj Coster-Waldau, Michelle Fairley

The Wolf and the Lion is the fifth episode of the HBO medieval fantasy television series Game of Thrones, first aired on May 15, 2011. It was written by the show creators and executive producers David Benioff and D. B. Weiss, and directed by Brian Kirk.

The plot centers in King’s Landing and Lord Eddard Stark’s investigations regarding the death of the previous Hand. In the city, the Tourney of the Hand comes to an end while the various factions that plot for power come to light. This delicate balance is undone when news arrive that Tyrion Lannister has been arrested by Catelyn Tully.

With this episode the season hits its halfway mark and the action picks up considerably. Despite being a topic of discussion at King’s Landing, Daenerys and Ser Jorah do not themselves appear in this episode. Jon Snow and all characters on the Wall are also absent, and Robb Stark does not appear in Winterfell scenes. As such, Emilia Clarke, Iain Glen, Harry Lloyd, Richard Madden and Kit Harington all have their names omitted from the opening credits.

Lady Catelyn Stark (Michelle Fairley) leads her entourage east through the Mountains of the Moon to get to the Vale, with Tyrion Lannister (Peter Dinklage) as her prisoner. They are set upon by the clansmen of the Vale, and Tyrion takes the opportunity to win greater freedom for himself and more respect from his traveling companions, particularly the sellsword Bronn. Catelyn brought her party to the Eyrie because the late Lord Jon’s wife, Lysa (Kate Dickie), is her sister, but when she arrives she finds Lysa mentally unstable and frightened of Lannister power. Catelyn also meets her nephew, Robin Arryn (Lino Faciolo), heir to the Eyrie… an eight-year-old boy with the “shaking sickness” whom Lysa still nurses. Tyrion is consigned to the Eyrie’s dungeon, the “sky cells” which open to a sheer drop down a mountainside, whilst Lysa prepares to render judgment on him for murdering her husband.

At Winterfell, both Bran (Isaac Hempstead-Wright) and Theon (Alfie Allen) continue to chafe under the restrictions of their lives: Theon against his status as both hostage and ward of House Stark after his father rebelled against the Iron Throne, and Bran against his paralysis and the fact that his mother left him while he was in coma.

Eddard Stark (Sean Bean) converses with Varys (Conleth Hill), who tells him of the manner of Jon Arryn’s death (a poison called the “tears of Lys”) and suggests that Lord Arryn’s former squire, the recently-slain Ser Hugh of the Vale, was the poisoner. Finally, he tells Ned why Jon was killed: “He was asking questions.”

Arya (Maisie Williams), meanwhile, is occupied chasing cats through the Red Keep, and stumbles upon a secret conversation between Varys and Magister Illyrio (Roger Allam) who are plotting to keep the realm from crumbling into chaos and worry that the current Hand may be killed much the same way as the last. Arya tries to warn her father but is unable to identify the two plotters (a holdover from the books, in which readers had to figure out their identities from physical descriptions), and the two are interrupted by the arrival of Yoren (Francis Magee), who informs Ned of his wife’s abduction of Tyrion. Meanwhile, Varys is confronted by Petyr “Littlefinger” Baelish (Aidan Gillen), who accuses him of betraying the realm on account of his plotting with Illyrio.

News arrives of the exiled princess Daenerys Targaryen’s pregnancy, delivered by Varys’s spy Jorah Mormont. King Robert Baratheon (Mark Addy), afraid of a possible invasion by the Targaryens and the Dothraki, gives orders that she be killed. Ned, believing that the Targaryen children were innocent, refuses to obey any such orders and resigns the office of Hand of the King, but is deterred from fleeing the capitol by Littlefinger’s offer to take him to the last person Jon Arryn spoke to before his death. This turns out to be a prostitute, Mhaegan (Antonia Christopher), with yet another of King Robert’s bastards on the breast. Whilst leaving, however, they are ambushed by Jaime Lannister (Nikolaj Coster-Waldau), who wants revenge for Tyrion’s kidnapping. Despite a brutal fight, the Kingslayer proves victorious, with Eddard’s guard detail slain, including his captain of the guards Jory Cassel (Jamie Sives), and Ned stabbed through the leg with a spear.